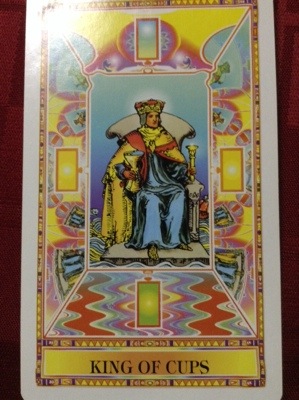 Thursday, we have the King of Cups.

You may be feeling very generous and giving today. It’s the Pisces effect, exaggerated. The Sun will be at 29 degrees Pisces, a significant degree in astrology. Any planet at 29 degrees is significantly energized by the sign it is in.

Interestingly, the King of Cups alludes to the Sun’s movement into Aries the next day on March 21st. Kings are associated with the Emperor which is associated with Aries the Ram. The Sun is also representative of a father figure or king (Sun rules Leo).

It’s an interesting blend. I’d capitalize on all things Pisces today because once the Sun goes into Aries, the season will have very different flavor even though Mercury will still be in Pisces.

How do you feel about Thursday?