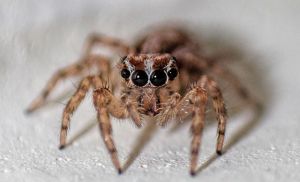 There is a spider that likes to lurk around my desk. I don’t see him most of the time, but lately, he’s been visiting everyday.

After numerous attempts to shoo or scare him away, I’ve given up.

He’s a jumping spider, so at least he’s interesting. And he’s sort of cute, after I stopped freaking out.

He likes to crawl from the left side, across the keyboard, and then towards the back, behind the desk.

At first, I tried to stop him because he was in my space. He’d keep wanting to venture where the keyboard is. I’m not sure why. There is no food. Since he kept insisting on going on my direction, I eventually just let him, curious as to where he was going. I hoped he’d just pass through, which he did.

I decided to do some research on him since he’s suddenly become my desk buddy….

Jumping spiders are generally diurnal, which means they hunt in the day and are not active at night.

They fasten safety lines before bungee jumping. I saw this as I watched horrified, trying to get him to fall off a cabinet.

Jumping spiders are considered curious and do not use webs to capture their prey. They are strategic hunters who can follow elaborate routes to get their kill.

They are usually found outdoors, but I’m not sure why this one won’t go outside.

I also thought there might be some universal significance, so I looked up the symbolism of spiders.

In the context of jumping spiders, there is nothing covering this. Jumping spiders don’t weave webs. But I suppose it’s mostly a difference of how you go about it. The traditional spider crafts their web to get what they want while the jumping spider pursues their prey boldly. (Astrology: Mars in Scorpio vs. Mars in Aries)

What do you know about spiders? What do you think you could learn from them?